This forum contains the rules, the themes, and the entries for the monthly manga contest
Post a reply
15 posts • Page 1 of 1

Wellll, I wasn't originally going to enter this month, due to time restraints, school work ect... but last night it suddenly got an idea (XD 30 minutes after deadline) I think there was an extention sooo

I stayed up all night, (until 6 am) sketching out 7 pages... Then I woke up at 2 pm, and started inking. Finished inking around 5 pm, and started fine tuning it a bit more...

I decided to mostly traditional with this one XD because It would have taken me FOREVER on the computer
~~
That's my process... XD And here's a bit about the story.

The theme for this month was "Fire" and I struggled all month thinking of an idea... fire? what?

But I remembered last night a story that I heard. About a man coming up on a burning car accident and pulling out the people inside.. He likened doing that, or not doing that... to what we do with people today in our world, both spiritually and physically.. Sometimes we just plaine DONT CARE!

I know I'm guilty of shrugging certain things off... like talking about God with someone, or not going to help them out...

And it's scary because what am I showing people who don't believe the way I do? That I don't care about them...that's what they see...

The is so much symbolism in this comic XD... so if you get confused just ask... It's not really logical, because seriously, if you saw a house burning most people would help...

but I guess with this comic, I'm going more toward the whole "not showing Christ's love" sorta approach.. 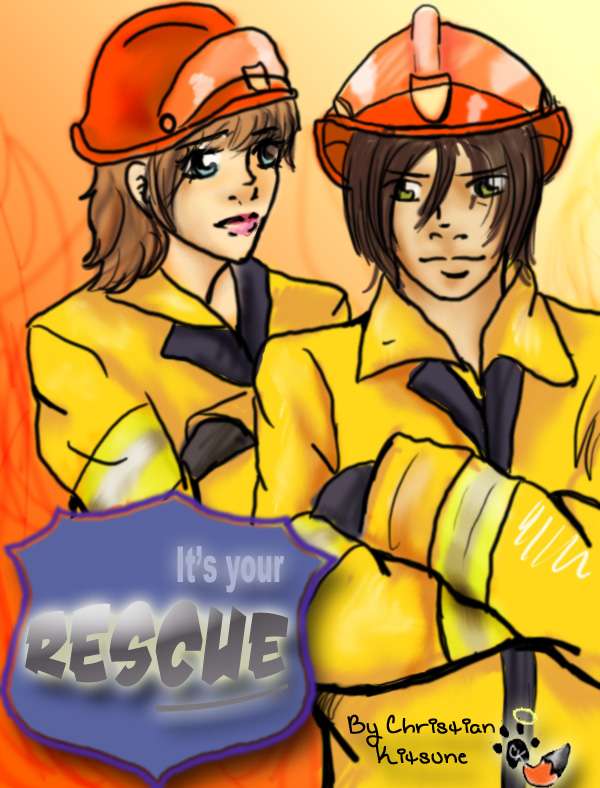 Lets see, because by the time this contest could end, it will be close to finals and tests for a lot of people XD Sooo.. I'm going to say "Tests" it can be any sort of test, physical, mental, spiritual, and school... XD

Please forgive me for any laspe in great lines... XD I did this entire comic in less than 24 hours...(because I STILL have assignments due) XD

DISCLAIMER: There is a bit of tobacco content on this page... I for one don't believe smoking to be a sin... But I do view it as a horrible thing to start doing to your body. I do not support the act of smoking. But I do have quite a few people in my life who are amazing Christians and do smoke. I love these peopel dearly... so please don't say anything stupid about smoking. If you have your own opinion that's fine.

[spoiler]With this page. I was kinda showing how selfish we Christians can be. We constantly see the pain, and suffering our fellow man is going through... We can see it in the way our schools are, the way our friends are. And while I believe we aren't completely not trying.. I do believe that Christians can do A LOT better with showing Christ. It's a discomfort I think for us to jump out there...and I'm guilty of it too. So I'm not judging or anything. ^^;

But yeah...please, let's start paying attention! I know this situation is pretty exaggerated...but it's really whats going on, spiritually. (I believe anyway)[/spoiler]
You do not have the required permissions to view the files attached to this post.

XD I don't know what I was thinking with the Father's hair...it's not supposed to be Elvis I promise...

[spoiler]With this page, I was also trying to show a positive opposite to my last page. That yes, there are some Awesome Christians who do jump out of their comfort zone and leap into Action like Jesus Calls us to do. Yes, it can be uncomfortable... but with Jesus as our barrier (like the water here) it sure makes things a little more bearable.

(told you there was a lot of symbolism here) >_> [/spoiler]
You do not have the required permissions to view the files attached to this post.

[spoiler] I think with this particular page i was going for... something like How some people can't see or notice how much sin can damage their life... and they really can't see it until someone tries to help them...or talk to them. And sometimes those people don't like that.

And the person trying to help is left wondering "What did I do wrong?"[/spoiler]
You do not have the required permissions to view the files attached to this post.

[spoiler]With this page, I was trying to show that once someone realizes that hey, They do Need Christ, the want to share that with others. This is represented by the mother telling her son to come with her...and the son asking his father.

His Father, however, still doesn't see that there is a major problem. He can't see the fire, and doesn't believe that it's there. Like non-Christians who don't see a problem with their lives, and really just go on living the way they want to.

These type of people need extra care...not someone to force them into believing.[/spoiler]
You do not have the required permissions to view the files attached to this post.

[spoiler]With this page, I wanted to show that God does arrive to help us when we call and ask him. He won't let us down.

Also, when Adam (the main guy) looks back, with this, I tried to represent how we should continually pray for and check up on those who we come in contact with. Christian or not, we all need prayer...

But sometimes if we try to take matters into our own hands... things happen you know? We also need to rely on God in these situations. XD I know that if I rely on myself, I'll become "THAT" Christian that can be so excited to get someone to believe...that I just kinda go too far. (It's been a while, but I know that I have that tendancy.)[/spoiler]
You do not have the required permissions to view the files attached to this post.

[spoiler]Again, God is always on call, ready to come in after us, and Keep on Praying.[/spoiler]
You do not have the required permissions to view the files attached to this post.

But I like to explain how things are, and what things represent... I apologize if I ruined the story and stuff for you ^^; )

Thanks for reading 83.
You do not have the required permissions to view the files attached to this post.

Hey, another entry! Wow, Kit-chan, you did this many pages in under 24 hrs? I think I know who the new 'cheetah' is! XD Excellent entry!

Wow, CK! Awesome job.
Need some excitement and meaning to brighten your bleak existence? Enter the CAA Monthly Manga contest!
(Warning: side affects may/will include irritability, the cramping of hands, frustration, and/or loss of sleep.)

XD how about "Swift like a fox" XD I'll leave the cheetah name to you 83.

Well, I may have finished it in under 24 hours, but I do hope it doesn't feel rushed...or look that way. XD I think it does a little.

But It can't really be helped... I had to finish the comic FAST. XD I have so much to do for school in the next month...and I wanted to get something entered.

The idea came really fast too.. (like it hit me suddenly XD) so... I guess I wanted to get it done right away.

XD thanks so much Aileen! 83

Your burning the midnight oil too, huh. Be sure to catch up on your rest. ^_^

Good Luck with school too.

Haha, yeah I've gotten about 10 hours of sleep in the past two days. Not bad...but It could be better XD.

That was really good! I love symbolic stories, and appreciated the notes you gave. I probably wouldn't have picked up on them otherwise. True, your drawing looked perhaps a little rushed, but I think it's pretty good for 24 hours

Here's hoping you'll get the idea sooner next time, eh?

I really enjoyed reading this; you did a good job! ^_^
You can find out things about the past that you never knew. And from what you've learned, you may see some things differently in the present. You're the one that changes. Not the past.
- Ellone, Final Fantasy VIII

"There's a difference between maliciously offending somebody - on purpose - and somebody being offended by...truth. If you're offended by the truth, that's your problem. I have no obligation to not offend you if I'm speaking the truth. The truth is supposed to offend you; that's how you know you don't got it."
- Brad Stine

[quote="the_wolfs_howl (post: 1211995)"]That was really good! I love symbolic stories, and appreciated the notes you gave. I probably wouldn't have picked up on them otherwise. True, your drawing looked perhaps a little rushed, but I think it's pretty good for 24 hours ]

Yeah I realize that...i'm so sorry about the rushing... I really wish I could have spent more time on it...but....

I have school work, art to work on, and my own webcomic to update... So yeah things had to go fast for me.

I'm glad that I can see what I can do in 24 hours though.