So, this is kind of just my personal shout-out to the CAA community about one of my year-old loves: Squishables. They're basically some of the cutest stuffed animals on the planet, and basically anyone who has a penchant for cute and fluffy things should know about it.

Squishable is a site that makes its own designed stuffed animals, but also hold competitions for random fans or artists to submit designs and possibly win the opportunity to have their design made into a Squishable, which I think is pretty cool. Also, they're all spherical. ^^ Except for the food plushies. But they're cute too.

One of my favorite winning designs was of the Fortune Cat, which they later released as a 15-in size stuffed animal (Squishable's "full size"). However, I was always hoping for a mini (7-in) version of it because...I have like no space. xD BUT Squishabe says they're only going to produce it if they get 50 more backers (preorders) in the next 16 days.

I just thought I'd throw it out here in case anyone else liked it, as it'd be really awesome if it reached the number of backers in time. ^^ Great for anyone who's a fan of Asian culture too. 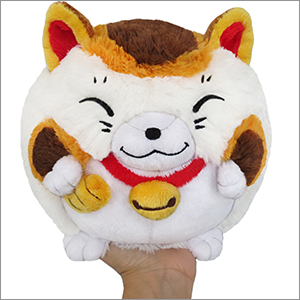 If this counts as some kind of commercial advertisement, I apologize, that was not my intention and I understand if this thread is removed. But I actually do really love this website and thought other plushie fanatics might appreciate it as well. ^^ (I have 9 squishables myself, actually, most of them minis.)

Totally cool with any other secret Squishable fans wanting to express their love.
Last edited by Exlon on Sat Nov 01, 2014 4:31 pm, edited 1 time in total.

I bought the T-Rex from Dinosaur Comics. It was a good purchase.

The first one I got was a mini Kangaroo Mouse, it was so cute. And then my self-control went allll downhill from there. xD

I'm currently watching anime and holding my giant Red Shiba Inu in my lap. It's kind of like hugging a beachball but comfier and cuter.

Users browsing this forum: No registered users and 34 guests